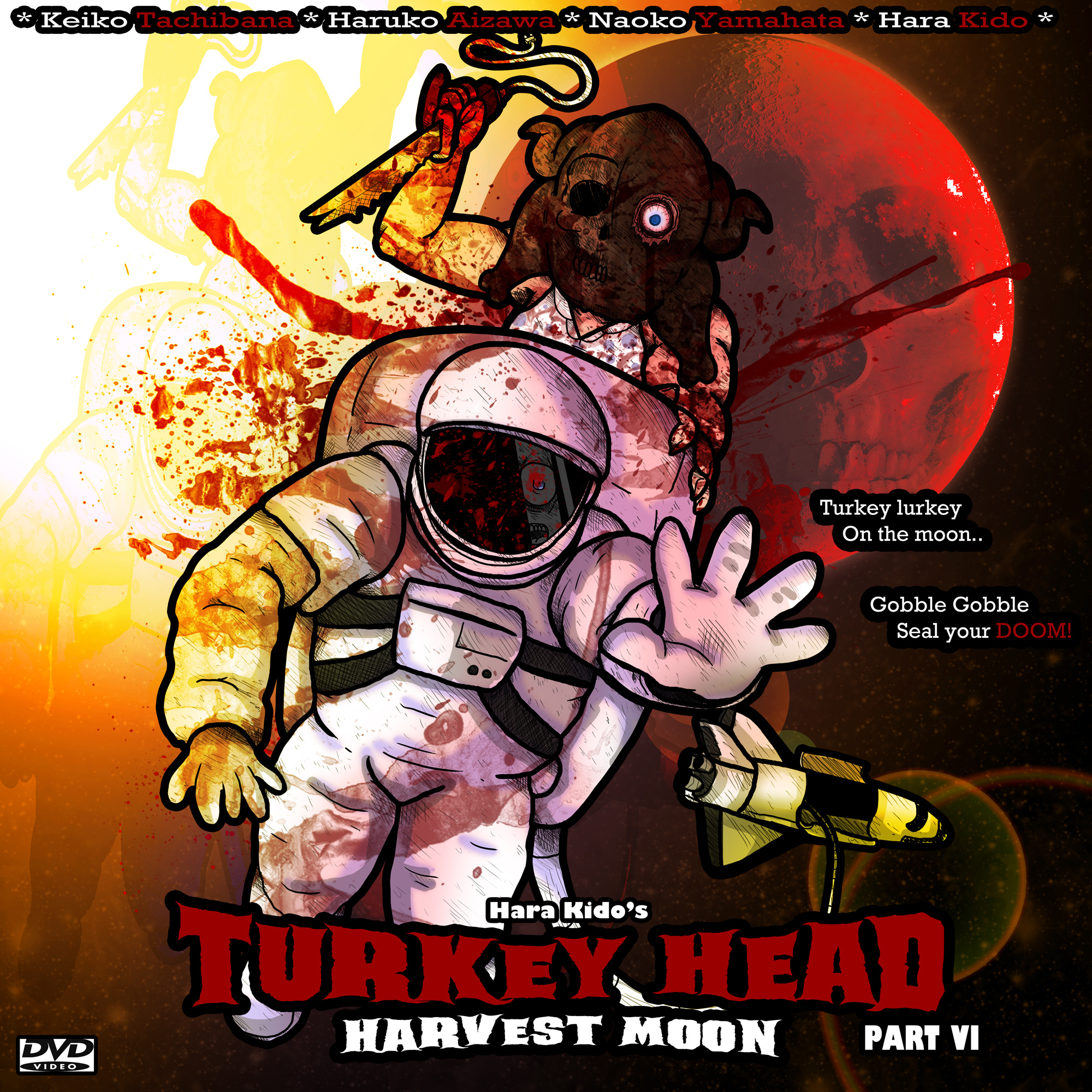 Gobble Gobble, starry night
Gobble Gobble, endless blight
Should you see the Turkey in the stars
She'll drag your corpse from here to Mars.

With every bite, you dim the light, and make room for Turkey Head to kill tonight.

Break out the stuffing, Fetch the ham, shatter the seals that bind the damned.
There isn't a chance, to get out alive, The Turkey Lurks so you try to survive.

On a tin can, in the middle of space, Your screams unheard, when she cuts off your face.
Died again, but now she's learned.
Turkey Head will always return.

If you thought that movie's synopsis was wild, wait till you hear this one...

Ok, so the movie starts us off with a montage of scenes from the series, showing Turkey Head, the Bride of Turkey Head, Their horrible spawn, Going Coastal, and finally the death of Turkey Head and her return as an undead entity, possessing their child.

It ends reminding us that the Turkey Beast had possessed the little girl at the end of the previous movie and with her family dead she went to live with a new family who works for Nasa. This is set up in the movie by showing the father at work with the mother, with the father working in training as an astronaut and the is a house wife, in an interview where they are telling the viewers that they are going to be the first family in space as they will be taking part in a program that will send one family to space to join up with a new space station that is testing what it's like for humans to all live together in an anti-gravity weightless environment. The reporter mentions how they're the perfect family, before the camera cuts to them at home, with the daughter begging for food. She's quite chubby and her dad is yelling at her for eating so much and being so fat, and getting in an argument with the mother who thinks he's too harsh on her, while she's too lenient toward the little girl's habits and allowed her to get chubby which was why she's been acting out, making the husband say that they better not embarrass him.

There's a bit of story, establishing that the little girl is still in there, she's just driven by the endless hunger of the turkey beast, and it causes her to act out, doing things such as eating dead animals she finds on the street or biting other children when they make fun of her, which they do often because of how strange she is. She talks to Turkey Head in the mirror who just stands and listens while she talks. They also establish that the father seems to be very controlling, as he is a well known astronaut and he thinks his reputation is everything. The Mother is a trophy house wife who seems to be very sad and spends her time trying to please their adopted daughter. They have a big party before the launch of their ship and at the party the mother speaks to some of her friends and they tell her that she's brave for adopting a kid who got attacked by a psycho since kids that get traumatized at a young age like that are often likely to be unstable themselves, and they ask about the Turkey Head and go over various urban legends about it. Meanwhile the father is speaking to several work friends and military guys who tell him to watch out for Space Madness, and tell him that you're supposed to tape a person to the wall when they have space madness. They laugh about it and say he'll have to watch out for his crazy kid. The kid finds a dead raccoon and eats some of it, and when another kid at the party makes fun of her for it she bites his ear off and they have to do a psychological test as to weather or not the family can go now. The father gets the doctor to fudge the results so they can leave and the family all get together to take off.

They announce the big thanksgiving dinner they'll celebrate with on the space station and show off all of thanksgiving foods they were bringing on board. The ship counts down and has liftoff into space. The Daughter sneaks to the back where the storage is and she opens up one of the crates and starts eating some of the snacks. She's drawn to the turkey that's being coked in a strange pressure cooker like device. She opens it and takes some turkey. As she chews she keeps picturing a creature peering back at her in the dark and she bites her cheek, getting blood on the turkey leg. Her father finds her and scolds her while dragging her away and tossing the drumstick back into the container. On the ship, the mom has a nightmare about her daughter stuffed to the gills asking for more food, and when she takes another bite a massive turkey monster explodes from her stomach, and she wakes up with a start as they arrive at the space station. The dad meets an attractive commander lady who seems to flirt with him. The next few minutes establish the space station, and show that it has ways of growing crops, and shows them learning to move in a weightless environment. Some people moving all the food set it out and looking into the turkey, it seems to be boiling and moving slightly. The mom keeps thinking of what was said about turkey head and her daughter and finds her kid drawing turkey head in a book and gets upset. She tells the father but he says to just keep her in check and make sure she didn't fuck anything up for them.

The father has a dream this time about Turkey Head, and he sees various news places reporting on the return of Turkey Head and him being the brave hero that kills it, And he pictures Turkey Head emerging from the stomach of the woman whom flirted with him earlier. He wakes up and ends up running into her in the back where the food is being held and ends up having sex with her in the back area. He feeds her food as they do it and she eats some of the turkey, despite it tasting funny, and it makes her really hungry. The wife seems to have a conversation with her reflection about how she needs to take care of her baby no matter what and that they can't trust the father because he's abusive, and she already has evidence of him cheating on her. Whenever she walks away, her reflection stays and smiles.

The Daughter befriends a child on the ship, the only other one there, and they understand she must be going through a lot and being around them actually seems to make her a little less monstrous, however the child's parent doesn't like her and tells her to stay away from the boy because she's a freak. The next day the parent is found dead, stabbed several times, a scene which we saw first person, and they say they'll have to keep it in holding until trash pickup comes. During this time the father keeps having his affair with the woman who has already gotten fat, and he keeps her there and stuffs her silly. She says she feels like something's wrong, and he keeps pushing her, dreaming of the glory. Another adult who seems to be mistrusting the new family is found dead as well and things are more tense as they have no idea who did it still. The Father confronts the little girl, wondering if it has something to do with her and learns that the mother was doing it, and that she knows about the affair. She agrees to not tell about the affair if he helps her dispose of the bodies and of another one, who was a teacher that was mean to their daughter. They feed all of them to the woman tied up in the garbage room, who is in a very bad state.

During this time, the little girl is mostly playing with the child, and with an engineer who now takes care of the child since the parent's death. They start to realize something is up and start investigating and find out who did it. Meanwhile the father goes to have sex with the woman again and this time when he does her belly explodes and a naked woman emerges. He's ready to kill her and prove he's a hero, but Turkey Head, reborn from her guts, kills him easily and dons her turkey mask. The engineer tries to tell them that he's behind everything and they just find both of their dead bodies, and the mom tries to turn it on him. From this point on, it's a sort of thriller like the Thing, where no one knows who the monster is, however this time the watcher knows it to be the mother. She begins questioning if what she's doing is ok as people on the ship get killed one by one as Turkey head attacks, with the Engineer trying to avoid him and keeping him from the little girl. They go to the mom for help and she realizes that her reflection is the ghost of the Bride of Turkey Head leading her to kill everyone. She ends up getting completely taken over by the bride and helps Turkey Head to take the girl, and the Engineer fights them to get her back, and ends up snapping the mother out of it who grabs Turkey Head and opens the air lock.

The Engineer, thinking the remaining few are safe, calls for help and they send a ship. They get on the ship and head home and when they do it says there is a hull breech. Turkey Head appears and attacks them, and the engineer has to fight her alone. Turkey Head and him get locked in the back area, which breaks apart upon re-entry and tells the little girl and her friend he loves them.

It ends with her seemingly cured of the turkey possession and going to live with the boy's mother who wasn't on the station, and she goes with them.

These movies just keep getting outlandish, and they seem to have picked up a stride though with lore on how they all come back, making some parts more coherent while other parts are... all over the place... I'm not sure if they'll make another sequel despite the sequel bait teased at the end, but I do hear they're making a sequel to the Remake that people are looking forward to!
Edit Delete